I am an unapologetic game enthusiast. I own a lot of games. Really it's a lot. While many computer science students develop an appreciation for computer and video games (or get into CS because of their love of video games), my preferences have always landed more on the physical end of the spectrum: board games, paper-and-dice roleplaying games, card games and the like.

Growing up there was the infamous "games cupboard" at the cottage, with old (and I mean effectively antique) copies of Monopoly and Clue, cribbage boards, puzzles, and random other games. At home we had a similar cupboard, with more recent copies of the same. Having three children to keep entertained for the two-hour drive to and from the lake most weekends over the summer, my parents smartly invested in a collection of travel-sized games, including Guess Who, Battleship, Clue (which, from a games-design perspective is an interesting re-imaging of the original board game using minimal pieces), Yatzee, etc...

I grew up playing board games, but never really thought of myself as a "gamer." That changed in 2000 when my aunt and uncle gave me a gift certificate for McNally Robinson (a well-known Winnipeg bookstore) for Christmas. Going through the aisles trying to figure out what to buy with my present I turned a corner and was confronted with Dungeons and Dragons display. 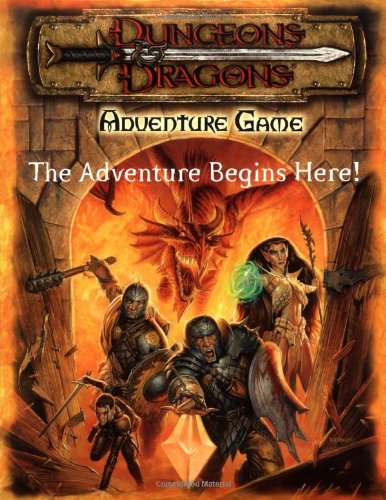 The box that started everything

I had heard of Dungeons and Dragons, but had never played it. I don't know why I knew the name -- possibly from an overheard conversations between cousins one summer, or an article on the news my parents watched -- but the name had lodged itself somewhere in my mind as one of those games I knew I wanted to try. Looking at the box, with the sword-wielding warrior charging through a door at the head of the party (though in hindsight, why is he charging away from the dragon? Hardly brave to be running away....) and the words "Adventure Game" emblazoned across the top got my imagination going.

My aunt and uncle had given me a gift certificate with enough money on it to get the starter box and, with a little extra money added on, one of the other rulebooks. I grabbed one of the boxes and the Dungeon Master's Guide (the Player's Handbook was sold out -- not that I even knew what a Player's Handbook was at this point), bought them, and immediately started devouring all the glorious artwork.

Fortunately for me, my younger brother was equally excited about this game. We alternated DMing chapters out of the six-adventure campaign book, each of us using a different party of four from the pre-made characters. It was great fun, and it wasn't long until we'd actually started a semi-regular campaign with just the two of us -- me as the Dungeon Master and him controlling a party of four (and eventually, if memory serves, five) characters.

Fast-forward to a high school band trip, and I introduced a group of friends, Chris M, Adam C, Adam N, Robert L, and Stef R, to the world of D&D. They fell in love with it almost as quickly as I did. I showed them how to roll their own characters, and I had my first regular gaming group. We'd play at each others' houses, going through an epic campaign (entirely devised by me) that -- so far -- is the only RPG campagin I've ever run that actually concluded the way I'd planned. (Most campaigns either have the players die before the end, or more likely players lose interest/move away and the campaign simply peters out.)

Despite occurring almost fifteen years ago, I still remember some of the details of this campaign. Among the highlights:

This campaign was tons of fun, though I suspect all of our parents thought we were crazy for spending so much money on stacks of rulebooks. But on the other side, we were spending money on books so maybe they didn't care as much. Plus we were all good students, getting good grades, and having a social life. Really not much of a downside. 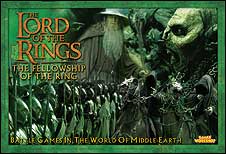 The Fellowship of the Ring starter box from GW

When the Lord of the Rings movies first came out, Games Workshop released a tabletop miniatures game based on series. My parents bought me a copy of the Fellowship of the Ring box set as a birthday or Christmas present.

Tabletop miniatures games like the Lord of the Rings game are an interesting beast. Players are expected to assemble and paint the plastic and metal models that make up their respective armies. Players then lay out their armies on a table with scale scenery and use rulers and dice to fight each other. A board game minus the board plus a large hobby element, effectively.

I'd assembled model cars and airplanes when I was little, so the idea of putting together tabletop armies and painting them wasn't too daunting. However, the scale of these models was a lot smaller than I was used to. Nonetheless I stuck with it, and got hooked on the whole tabletop wargaming hobby.

In addition to Lord of the Rings, I got into Warhammer Fantasy and Warhammer 40k, painting entire armies for each. For years I was a regular player at the Winnipeg Games Workshop store, and even worked there part-time for a year.

During those years my painting abilities soared. I loved the hobby aspect -- in some ways I liked painting the models more than actually playing the game. I entered several local miniature painting competitions over the years, winning multiple trophies including...

WHFB Witch Hunter I painted in 2008

The Rise of Board Games

As university started taking up more and more of my time I sadly had less time to dedicate to my wargaming hobby. This combined with a sense of disillusionment with Games Workshop endlessly revising their games' rules led to me taking a bit of a hiatus from the tabletop wargaming. With my high school D&D group having moved onto other things meant I had lots of time for new games.

Fortunately the modern board game revolution is well-underway and there are literally thousands of board games out there that are all far, far better than your old family Monopoly set. Modern classics like Settlers of Catan (which I am not personally fond of, but is a good introduction to the world of modern board games for the non-gamer) and Carcasonne have become staples for most people. More complex games like Twilight Imperium or Eclipse feel almost like a more social, tangible version of computer games like Sins of a Solar Empire.

Finally, with the rise of Kickstarter, small game designers are pumping out new and unique games. I've chipped in to help fund several, and have regretted none of them. Games like Shadows of Brimstone, Kingdom Death, and City of Iron -- all Kickstarter games -- feature in frequent rotation at my game nights with friends.

Physical games are a fantastic hobby. They're social, they're fun, and thanks to the internet there are more of them now than ever before. So there's no excuse not to Play More Games!